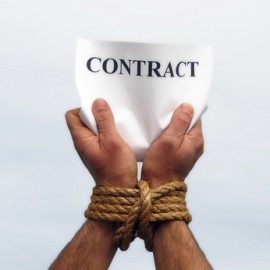 The Consumer Financial Protection Bureau (CFPB), a federal agency created in 2011 after passage of the Dodd-Frank Wall Street Reform and Consumer Protection Act in the wake of the “Great Recession,” has proposed rules that would prohibit mandatory arbitration clauses that are often found in consumer contracts, including service contracts for things like cellular service and broadband service. Specifically, the CRPB is proposing to establish 12 CFR § 1040 which could contain regulations governing two aspects of consumer finance dispute resolution.  First, the proposed rule would prohibit covered providers of certain consumer financial products and services from using an agreement with a consumer that provides for arbitration of any future dispute between the parties to bar the consumer from filing or participating in a class action with respect to the covered product or service.  Second, the proposed rule would require a covered provider that is involved in an arbitration proceeding pursuant to a pre-dispute arbitration agreement to submit specified arbitral records to the CFPB.  Comments must be received by the CFPB within ninety days of CFPR Notice RIN 317—AA51 (Docket No. CFPB-2016-0020) getting published in the Federal Register.