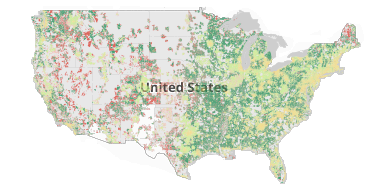 The FCC’s Wireline Competition Bureau (Bureau) has concluded the Connect America Fund (CAF) Phase II challenge process and has released an updated list of blocks to be treated as served or unserved for purposes of calculating CAF Phase II model-based support for price cap carriers. Adjustments to the actual cost model will be made in the coming weeks. The challenge process was initiated in June 2014 with the Bureau identifying nearly 745,000 eligible census blocks. Over 140 parties filed challenges regarding the classification of nearly 180,000 census blocks. Based on the Bureau’s review of the challenges and replies, the Bureau determined that 57,711 census blocks now should be treated as unserved and that 36,377 census blocks now should be treated as served.